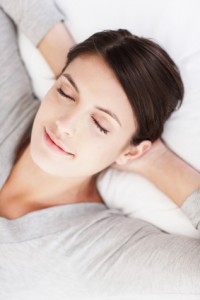 180 patients with primary insomnia took part in this six-week, double-dummy, placebo-controlled trial, which assessed changes in self-reported characteristics such as sleep quality, daytime functioning, and quality of life as evaluated by the Chinese versions of the Pittsburgh Sleep Quality Index (PSQI), the Epworth Sleepiness Scale (ESS), and the Short Form 36 (SF-36).  Participants completed the SF-36 at baseline, post-treatment, and at two-months follow-up, while the PSQI and ESS were completed more frequently.

Patients were randomized to one of three groups: treatment, estazolam, and control.

The treatment group received acupuncture treatment every other day for six weeks with the same protocol employed for all group members: DU24, Sishencong, DU20, SP6, and HT7.  De qi was elicited, and the needles were retained for 30 minutes.  Additionally, participants in the treatment group took a placebo 30 minutes before bedtime on the days without acupuncture.  Patients in the estazolam group took 1 mg of this sedative, commonly prescribed in China for short-term treatment of insomnia, 30 minutes before bedtime every other day.  On the off days, these patients received “sham” acupuncture, with needling at points not traditionally prescribed for insomnia: LI14, LI10, LU10, and GB31.  No needle manipulation took place in these treatments.  Participants in the control group took the placebo before bedtime and received the “sham” acupuncture treatment on alternate days.  All patients, assessors, and statisticians were blinded to the subjects’ group assignments.

During the six-week intervention period, all three groups showed significant improvement compared with their scores at baseline.  Only in the treatment group, however, did the effects persist beyond the intervention.  Compared with the control group at the two-month post-treatment follow-up, “total sleep time” and “sleep efficiency” – two subscores of the PSQI – were significantly better in the treatment group, as was “physical functioning,” a dimension of the SF-36.  Additionally, compared with both the control and the estazolam group, the treatment subjects had, overall, significantly better scores at the two-month follow-up on the “sleep quality” and “daytime dysfunction” subscores of the PSQI and on the ESS, an evaluation of daytime sleepiness.  Most dramatically, the “vitality” dimension of the SF-36, at both week 6 and at the two-month follow-up, was significantly better in the treatment group than in either the control or the estazolam group at the p<0.002 level or better.

View all posts by Mavis Bates →

Ready To Get Started?

Fill Out Our Health Questionnaire

We Accept Most Insurance